How I See St-Pierre vs Condit 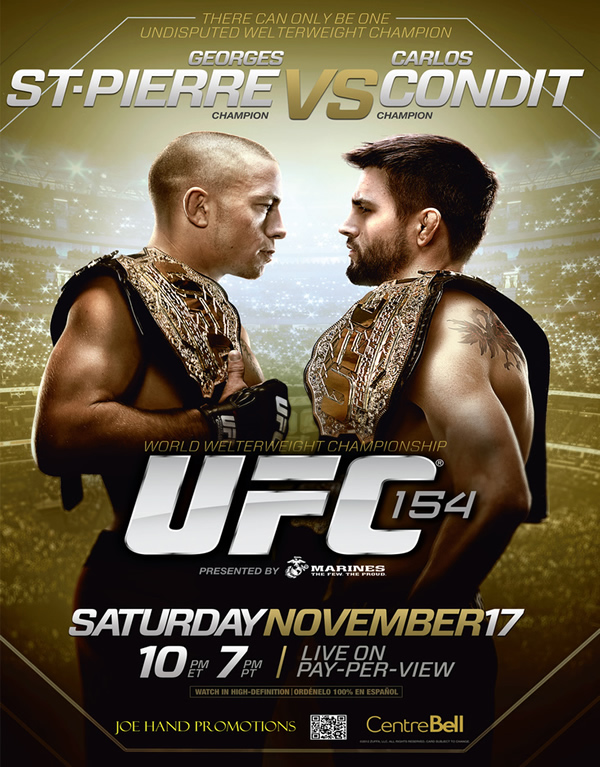 Despite his recent vow to take more risks in attempts to finish opponents, specifically Condit tonight at UFC 154, I don’t see Georges St. Pierre going all out as we’d like. I think he’ll be his usual cautious self, especially in the first two rounds, but conservatively taking advantage of knock out opportunities. It’s not very likely that Condit, the slightly better striker of the two, will leave many opportunities to take.

But if GSP can take the fight to the ground, it’s a different story. He’s clearly the better wrestler and jiu-jitsu fighter and is more likely to take those risks while grappling. St. Pierre’s cardio preparation is unquestionably adequate and he’s most likely training for ground-and-pound situations in which he’ll need to expend a large amount of energy to go for the finish. He’s not one to make the same mistake as many others who’ve worn themselves out going for the finish but failing.

I see Condit going for a similar approach yet less reserved, especially in the last couple rounds. Condit definitely wants to win the real championship, as opposed to his interim title, but I think he really wants to make a statement.

He’s trained in the Greg Jackson camp, the same as St. Pierre, although neither of the two are being trained by Jackson for this match, and will have a plan in mind. If GSP remains reserved going into the third or fourth rounds, Condit may take it up a notch and really go for the finish. Then again, that may lead to the opening that GSP will be waiting for.

Wherever the fight takes them its sure to be a very technical one. Lets just hope it’ll be an exciting one too.