The Grammy Heist: What Does Macklemore’s Grammy Wins Mean For Hip-Hop? 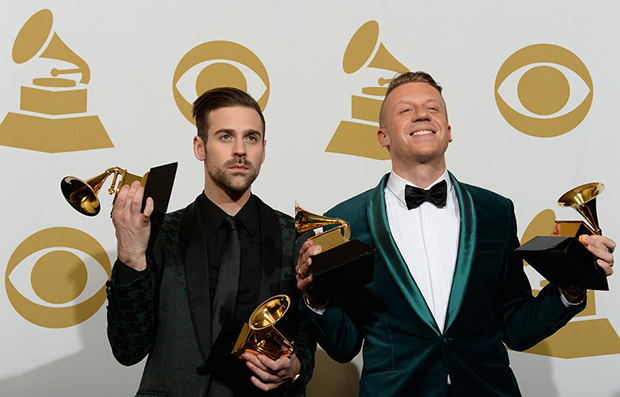 For those who didn’t watch or pay attention to this year’s Grammy’s, Macklemore and Ryan Lewis’ The Heist swept the entire Rap category. That’s right: almost every single award, even Rap Album of the Year.

It doesn’t take a rocket scientist to see that Kendrick Lamar was the clear favorite going in. A quick comparison tells you all you need to know: good kid, m.A.A.d. city received a 91/100 on Metacritic, making it the second highest scoring album of 2012 besides Channel Orange. It was rated the best album of 2012 by BBC, Complex, Fact Magazine, New York Magazine, and Pitchfork, as well as the second best album by Billboard, Time, MTV, Spin, LA Times, and the Chicago Tribune (In only two of those cases coming second to Channel Orange).

But GKMC was bigger than just being ranked being best of that year: it spurred on debates on how long it takes for an album to be recognized as a classic. It has already been named one of the best Hip-Hop albums of the best five years by Complex. It was #19 on “The Greatest 50 Albums Since ’93” list by Vibe–six months after its release.

The Heist, meanwhile, received a 74/100 on Metacritic. It landed at #9 in the Omaha World-Herald and #3 on Amazon’s list of albums for 2012. Yet, it’s content is responsible for Macklemore winning four Grammy awards, each time besting Kendrick’s GKMC‘s content. In fact, The Heist was less acclaimed than both Nothing Was The Same (79/100) and Yeezus (85/100), two other albums that were nominated for the Best Rap Album category. Both albums also wound up on more best album lists to close out their respective years as well.

If this is all true, the question that should be asked is it what about The Heist makes it stand out from its competition? The answer is it was an independent album, it had bigger hit singles and, as much as I hate to go there, Macklemore and Ryan Lewis are the only white artists nominated in the category. Beyond that, in every other category of comparison you can think of, The Heist loses when compared to the majority of the other albums–especially GKMC.

I already see a host of people commenting that it is “just an award”. It’s not about the award, per se. What it IS about is this: how many accolades, how much support, how much success does an album from our genre need to receive before it is given the same respect as others? Because the truth is GKMC, on both accolades and acclaim alone, was the most qualified for EVERY AWARD it was up for, including Album of the Year. But that is a general category, and no Hip-Hop artist has ever won a general category award since Lauryn Hill swept in ’99 and Outkast upset with a AOTY win ’04. At least until this year, when Macklemore and Ryan Lewis’ picked up the Best New Artist award. Regardless Kendrick’s loss and Macklemore’s win, this is a historic win for the genre.

An album from our genre still won those awards. So what exactly is the problem? Isn’t it still a win for Hip-Hop? The answer is yes, but that ignored what the real problem is: it was an album that was far less celebrated and far less mentioned at the end of the both 2012 and 2013 than GKMC. I can’t argue with the Rap Song or Rap Performance wins, as Thrift Shop was the biggest single of both 2012 and 2013. However, in consideration of an entire album of content, it is strange that The Heist would beat out an album that received overwhelming favor across every genre of music.

What does this mean for Hip-Hop? It means that no matter how far we’ve come as a genre, no matter how much acclaim one of our projects gets, it will still be under the same arbitrary standards that the Grammy’s have always held its projects to. It’s not about the best records, but the biggest records. Within the Hip-Hop genre, The Heist was the album responsible for making the music industry the most money in 2013. It’s not about how good you are, or how big an impact you have on the genre. Instead, it’s about how much money they can make off of you.

That’s why despite Macklemore’s insistence that this is a win for all the indie labels out there, he couldn’t be more wrong. It is a big win for a music industry that understands that the real money isn’t made through album sales but .99 cent singles. It’s an industry that we, as Hip-Hop consumers, have supported by indulging our monotonous tastes instead of purchasing the content that we admire. Macklemore went pop, sure, but his album is still labelled as a “Hip-Hop album”, so he wins all the Rap awards and even gets a general category win or two.

It’s both a win for our genre and a loss. It’s a sign that the best of the year isn’t always the Best of the Year.