Damn. Last night in NYC, Jay-Z announced that Jay Electronica is a newest member of the Roc Nation team.

Jay Electronica goes over to Roc Nation? In the past month or so, I heard the rumors of the deal, but then again, a few people have stated they were signed to Hov’s label only to find out later it wasn’t true.

Say what you will about Jay-Z, but on the Hip-Hop side of things, he has already signed two very talented MC’s with J. Cole and now Jay E. (I’m not even mentioning Will & Jada’s kid). When we all were suggesting for Hova to sign this person or that person to Roc Nation, maybe he had a plan all along? It’s a marathon, not a sprint.

Either way, seeing that Jay Electronica is one of my favorite MC’s, I’m happy to see that after a long road, he has finally got to this point in his career. 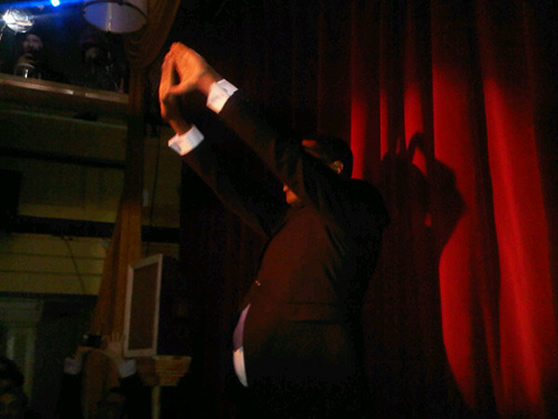 Earlier I spoke to Jay E. about the big news, and his plans. He said that the actual contract was signed on Saturday, after a few weeks of intense daily communication and creative courtship. How did it start? With a chance meeting at the Spotted Pig. How did Electronica know Hov was serious? His second replay email came attached with a verse. That ended up becoming the Jay Electronica and Jay-Z collaboration “Shiny Suit Theory” (featuring French chanteuse Charlotte Gainsbourg and The Dream).

There’s irony in the fact Jay-Z appears on a Jay Elec song that’s based on Diddy’s description of Jay Elec. Because Diddy has been mentoring and courting Jay for over a year, in the hopes of signing him as well. Electronica insists he values everything Puff contributed and hopes to have him involved in his career, but said “Jay-Z made me an offer I couldn’t refuse. And I have the freedom I need too.”
The natural of the underground, the anti-establishment, the independent artist is rapidly changing…so I’m anxious to see what happens when Jay the conglomerate and Jay the mystic mix commerce and art.