nappyafro Interviews The Makers Of ‘Snow On Tha Bluff’ 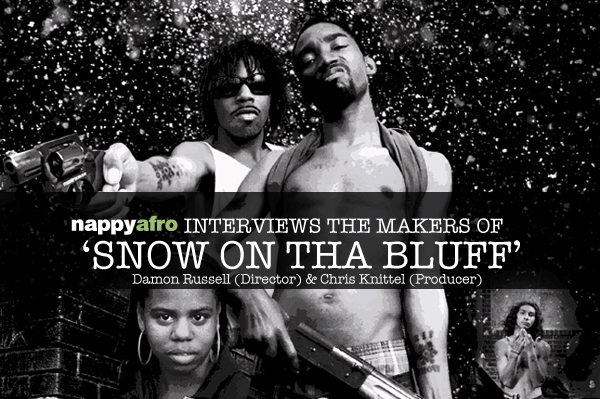 When I first saw the trailer for the movie Snow On Tha Bluff, I was intrigued. Okay actually first I wondered if Curtis Snow, the guy robbing the car full college kids, was currently in jail. That’s how raw the footage was to me, I thought Snow On Tha Bluff was about a thug documenting true life events around West Atlanta. Even after finding out that Snow On Tha Bluff isn’t a documentary, you still have to applaud the makers of the film for bringing that kind of realism through the screen. I got to chop it up with the makers of Snow On Tha Bluff, Damon Russell (Director) & Chris Knittel (Producer).

The first thing I gotta ask: The way you chose to present this story for Snow On Tha Bluff. What made you decide to use the documentary style? Everybody I showed the trailer to was convinced it is a legitimate straight up documentary and that everything was a 100% real.

Director Damon Russell: The main reason is we have to protect ourselves and everyone in the film. A few months before we premiered the movie I got a call from a detective from the Atlanta Police Department. He was investigating a string of home invasion robberies on the West side. He had gotten a hold of a bootleg copy of the first 40 minutes of the film and he thought Curtis and his crew were involved. Ultimately, we convinced him that it was just a movie. But to avoid future legal action we’ve been advised by our counsel to never divulge what is real and what is not. We’ve since deleted all of the other extra footage that is not in the film.

I read that the idea for movie was sparked by footage Curtis Snow initially shot by himself. What was the first clip the director/producer saw?

Director Damon Russell: Believe it or not the first thing that I saw in the footage that made me really think there was a movie there was a scene that Pancho shot with Curtis and his baby. The other stuff of Curt and his crew playing with pistols was great, but that scene of Curtis and baby was really moving and gave me a glimpse into the real Curtis beyond the gangster persona. When I saw that I decided that we could make a good movie.

How hard was it shooting on location in West Atlanta?

Director Damon Russell: Overall it was great. We had lots of nice people who worked really hard on the movie. Our biggest fear was always the police. The APD doesn’t play around. I respect what they do, but if you are poor and in the hood a different set of rules apply to you. We were pulled over and searched dozens of times. We got arrested once. Most times we’d shoot a scene and we’d leave immediately. We always had to stay one step ahead of the police. 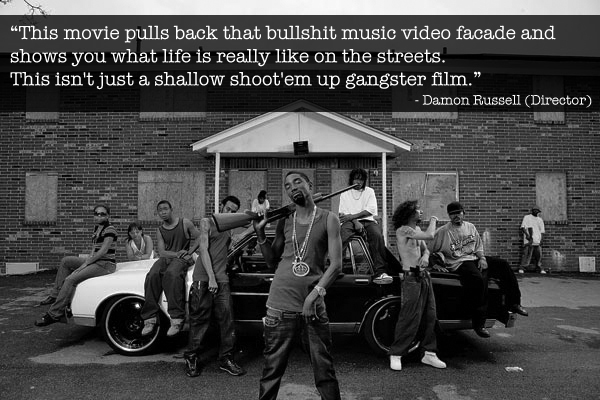 How long was the shooting process?

Director Damon Russell: The movie was shot over the course of a year and a half.

How is Curtis Snow handling the attention the movie is getting?

Producer Chris Knittel: Curtis is handling the attention well, he’s a pretty laid back guy, so when people stop him on the street, it really doesn’t bother him.

I love the imagery/promo pics that have gone along with the movie. Who was in charge of that and how did that come together?

Producer Chris Knittel: We are blessed to have talented artists reach out to us based on their love for the movie. Music video director/photographer Diwang Valdez (Motion Family) reached out to us, he’s a fan of the movie and he wanted to shoot Curtis in his neighborhood. He shot a series of promo pictures, they look raw as hell! We’ve had other photographers in the music industry lend their skills as well, such as Zach Wolfe. Curtis is a natural on camera, they enjoy working with him.

Explain what happened at the Atlanta Film Fest Screening?

Producer Chris Knittel: During a controversial scene in the movie, a guy in the back of the theater lost his mind. I think the images stirred up something from his past because he got real emotional. He started throwing insults, but little did he know, Curtis and his entire crew were sitting up front. They jumped up, and the problem spilled out into the lobby of the theater. The theater was completely sold out, and people ran for the exit doors, they thought the movie was coming to life! Realizing that he had just stirred up a hornets nest, he quickly changed his tune, he was very close to an all out beat down. My director Damon was pissed over people running out, and the drama that it stirred up, but I assured him that this was actually going to work in our favor. And it did, the next day that incident made national headlines, we got more radio interviews, and because of that fool, thousands of more people found out about the movie. People were really talking. As they say, there is no such thing as bad publicity.

I watched an interview you guys did that mention you were having trouble with distribution because of the subject matter in Snow On Tha Bluff, have you faced trouble getting this movie played in some areas or film festivals because of the content? Wasn’t the movie on Xbox Live for a second?

Producer Chris Knittel: It’s really been a double edged sword in regards to distribution. A lot of the big distribution companies will say, “we love the movie”, but… “it’s too controversial” “we can’t sell it at Walmart”. It takes a real creative person with a vision to distribute a movie like “Snow on tha Bluff”, some people are unable to think outside the box. We’ve had a lot of luck with film festivals, at this current moment we’ve got three or four we are playing at in late September, and many more to be announced! I just came back from the HBO: New York International Latino Film Festival, they were really digging the movie up there. During the Brooklyn Film Festival, we caught the attention of Filmmaker Magazine. My director was featured in Filmmaker Magazine’s: 25 New Faces of Independent Film for 2011, that was a huge accomplishment. During the week of the Slamdance Film Festival, Xbox Live offered the movie for a limited time rental. 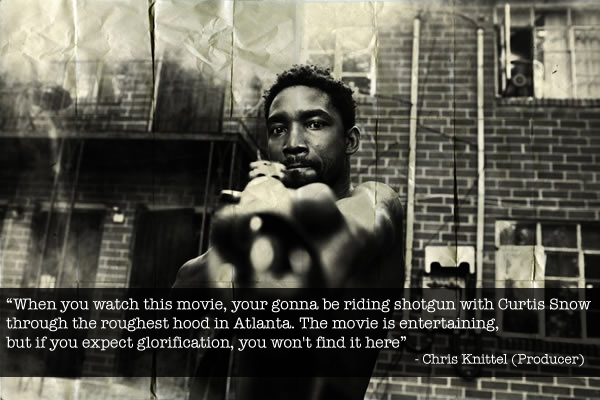 Have you made any progress with any buyers?

Producer Chris Knittel: Yes we have! We are in talks with several different distribution companies. That’s all I can say right now.

What’s the main reason people should go out and support Snow On Tha Bluff?

Director Damon Russell: This movie is one of the most authentic movies about the hood ever. As much as I love Hip-Hop, I get tired of rappers talking about how glamorous it is to sell dope and shoot people. This movie pulls back that bullshit music video facade and shows you what life is really like on the streets. This isn’t just a shallow shoot’em up gangster film. It’s a story about the violence in urban America, the failure of the war on drugs and the struggles that millions of people face everyday.

Producer Chris Knittel: When you watch this movie, your gonna be riding shotgun with Curtis Snow through the roughest hood in Atlanta. The movie is entertaining, but if you expect glorification, you won’t find it here. Your gonna see the reality, and it ain’t always pretty.