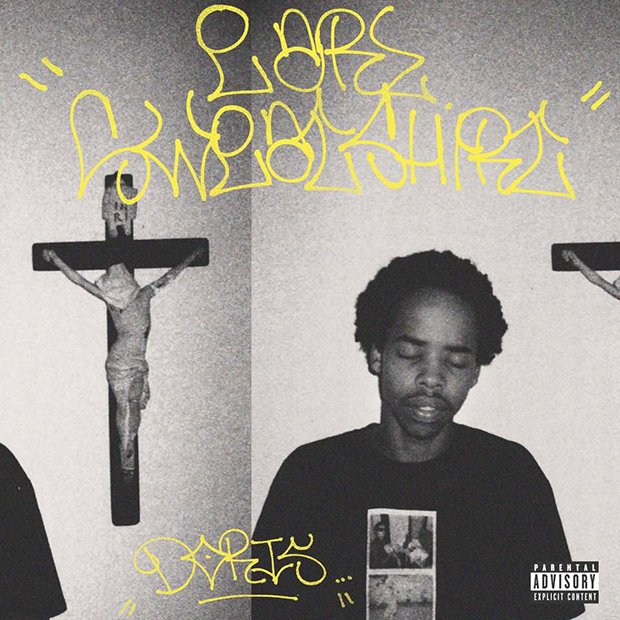 Earl Sweatshirt is the most anticipated member of the popular California collective, Odd Future, to release an album. From his earlier verses on Odd Future projects to the mystery of his disappearance during the group’s rise to fame, Earl has been able to remain a standout of a heavy populated collective. His major label debut album, Doris comes months after Tyler, The Creator’s critically acclaimed and commercially successful album, Wolf.

1. Pre
Featuring SK La’ Flare; Produced by Michael “Uzi” Uzowuru
I don’t understand why this is the first song on the album. SK La’ Flare takes up almost two minutes of listeners’ time with his boring, unimpressive verse.

2. Burgundy
Featuring Vince Staples; Produced by The Neptunes
Great production from The Neptunes on here. This should have been the album opener as he opens his verse talking about the missed opportunity of spending time with his grandmother because he has an album to work on. Even though the last couple of bars were kind of lazy, it’s still better than the previous offering.

3. 20 Wave Caps
Featuring Domo Genesis; Produced by Samiyam & randomblackdude
During this song I wondered if anything on the album was going to have a complete hook or chorus. Good verse from Domo Genesis.

4. Sunday
Featuring Frank Ocean; Produced by randomblackdude & Frank Ocean
Finally a verse with a great amount of substance. On this song Earl talks about fame taking him away from his significant other. I’ve heard Frank Ocean rap before on “Blue Whale” and “Oldie” and enjoyed those attempts, but on here it seems underwhelming.

5. Hive
Featuring Vince Staples & Casey Veggies; Produced by randomblackdude & Matt Martians
Casey Veggies definitely should have gotten a verse if Vince Staples got one. Nothing much here, but some good rapping. Also, I like the video.

6. Chum
Produced by randomblackdude & Christian Rich
Note that this is the first song on the album without a feature. This is also the first whole song I heard from Earl Sweatshirt. I loved it and played it constantly when I first heard it. It was a great introduction for me as someone that never listened to his music or knew much about him. Wish I got more songs like this on the album.

7. Sasquatch
Featuring & Produced by Tyler, The Creator
Great lyrical exercise. This is just Tyler and Earl rhyming; no hook needed. If you don’t believe me  just read below:

Fuck the block news and the venues, they can’t handle us
They can’t stand us including fruits that Frank’s channeling
The Ku Klux Klan see me and my managers
But thank me when they ask where the Five Panels is (fuck)
Man, I suck now, I ain’t still dope (nope)
But Chris and Rihanna’s fuckin’ again so there’s still hope
Oh fuck, I went there, balling bitch, I’m Ben’s hair
Y’all barely breaking like Taco’s self-esteem in a thin chair
Old Navy bitches love this gap, yeah this grin’s rare
Watch a n!gga smile like five-year-old child
I’m kicking it with Nak and the n!gga from Green Mile, it’s
Red Bull in this cup so a nigga may seem wild but
That’s just all the sherm I was burning a little while ago
Don’t let me get hold of that rifle
Shout my nigga Sage Elsseser and Sean Pablo
Surrounded by them n!ggas that skate with a sick style
And some freckled bitches with giant peaches that’s vile
They never did catch that rhino

Squadron full of some lost souls
Sergeant of all, it’s autumn and Nak just nollied a pothole
Non-cooperative with his momma’s wishes for college
And coppers labeled a problem since paying for Damianos
So shimmy through the swamp, nigga, follow me through the foxholes
Moral Orenthal with a pretty bitch in a Bronco
Hopped right off the seven and stumbled into some Vatos
Threw a punch, got jumped, dusted off and then walked home
Shit, it’s like 6 p.m. and his temple throbbing
Hand in the cabinet by seven, sniff the prescription oxies
Logo in the boxes, all my n!ggas hostile
Cautious of your crosses, scoffing at your doctrines
Bitches augmented stupid as the group is
Only slightly, write precise to get a pussy n!gga tooth chipped
Man these stitches shut the loose lips, stumbled in a Ruth’s Chris
Slid into a booth and hid the luggage from his shroom trips
See, Lionel ball with Leonardo on the weekend now
And Maui on a scenic route, we on the second season now
Small fry got ’em seasons salty, weeded, coughing
Ease up off me, end is breathing easy as bulimics barfing
From a different breed of doggy, from a different seed and cloth
And teeing off, believe it’s Golf Wang, nigga 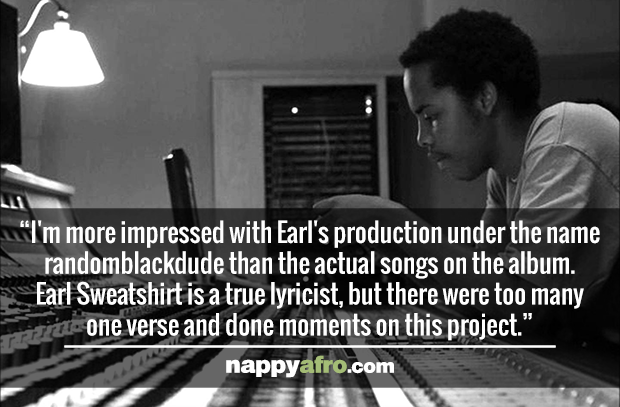 9. 523
Produced by randomblackdude
Interlude to show off Earl’s production skills for a minute and a half.

10. Uncle Al
Produced by The Alchemist & randomblackdude
This is only 52 seconds long? After a minute and a half of an instrumental we only get 52 seconds of lyrics? I listened to this song 4 times in a row and I couldn’t see the point of it here.

11. Guild
Featuring Mac Miller; Produced by randomblackdude
If someone told me this was originally Mac Miller’s song, I wouldn’t be shocked. He owned this song. Earl contributes a good verse, the chopped and screwed production on this song are very impressive.

12. Molasses
Featuring RZA; Produced by RZA & Christian Rich
Will the RZA ever stop making great production or at least stop being underrated? With two verses from the main artist and RZA providing ad-libs, you can’t help but wish this was longer and featured a third verse.

13. Whoa
Featuring & Produced by Tyler, The Creator
Apparently, Tyler does not like all the talk after the release of “Chum”. On here, he plays the hypeman and hookman while encouraging his friend to show old fans that he can still go in as much as he did on Earl.

14. Hoarse
Produced by BadBadNotGood
This is the second personal track on the album. On here he talks about how weed and Four Lokos took his stress away and how he wants to keep rapping until the day he dies.

15. Knight
Featuring Domo Genesis; Produced by Christian Rich
New Wu, New Wu. Is the RZA back? No, the Wu-Tang architect did not produce this cut, Christian Rich used the same Magictones sample that can be found on Raekwon’s Only Built 4 Cuban Linx Pt. 2. The slow down tempo at the end of their verses is incredible for the listening pleasure. After impressive bars from Domo, about not finishing college like he promised his Mom, and Earl, dedicating his verse to absent fathers and critics that have nothing positive to say about Odd Future, this is the end of Doris.

Bottom Line:
I’m more impressed with Earl’s production under the name randomblackdude than the actual songs on the album. Earl Sweatshirt is a true lyricist, but there were too many one verse and done moments on this project. There are too many rappers in the world, but not enough Rap/Hip-Hop artists that can create songs, concepts, and albums. Only five songs had hooks. Hooks are the constant reminder of what the song is about and that was definitely needed on an album with confusing song titles, like “Uncle Al”, “Chum”, and “Sunday”. Honestly, I’m more excited for another album from Tyler, The Creator or his collaboration album with Earl Sweatshirt, EarlWolf than a new project from Earl Sweatshirt. The album would have fared better with more personal songs like “Chum” and songs to show off lyrical ability like “Whoa”.