Taking Off Your Cool: “Black, Maybe” 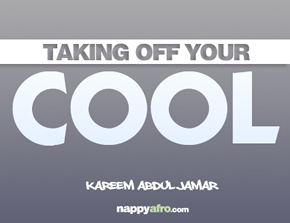 I will state this now. This column is NOT an issue of color or race. It’s a deeper issue that happens to be rooted in it, unnecessarily I might add. I debated writing this a number of times, but I feel somebody needs to say it; and if it gets through to one, maybe the effort was worth it.

First, my reason for writing this. I think back to a trip to Alabama with a good friend of mine for a wrestling show [Youtube “Kareem Abdul Jamar”, check my pedigree :p] and I find myself rattled by some commentary he made about what I was playing at the time. Gym Class Heroes was in the CD player, the track was “New Friend Request”.

I’m grooving and he’s laughing, so of course I want to know what the joke is.

Friend: “Man, why you listening to this white people rap?”

Me: “White people rap? Didn’t buy this CD in THAT section. Must’ve missed it.”

I was willing to write it off. I’ve come under fire all my life for my musical tastes, dreams, style, and grammatical syntax [peep the grammar]; often being described as being the “White Black Guy”….I fucking hate that. I’m always black enough when I get pulled over, and my interests aren’t color-coded; open your mind.

I digress, my friend is a grown man with his own thoughts and Lord knows, that’d be a task to change. His kid though? It bothered me all day. His child is going to view music as white, black, and whatever else instead of what it should be at the end of the day….

Not to sound like the older cat at the barbershop where everything was better in “his day”; but in what I’d consider the golden era of rap, 1980-1992, you had EVERYTHING. Experimentation, storytelling, mashing, consciousness, raw styles, flash, trash talk, and so much more. Everything was done just enough; not too excessively. Rap from the early 80’s to the early 90’s had to be the most exciting genre to watch unfold, because it was open to being whatever you needed it to be. There were no definitions. The most creative musical form out there.

Now, it seems like the artists that still believe in that notion are pushed to the backburner and considered irrelevant. Trap-stars, self-proclaimed killers, and hood figures are the order of the day. They all boast about the same things, their stories an unoriginal tapestry of uninspired wordplay. A dark society demands dark figures to place on a pedestal, AND OUR CHOICES ARE ENDLESS!

What people are failing to understand is that your soundtrack, the music you take in, has a huge effect on who you are and what you think. Especially in the case above where it molds our youth. African Americans already have a complex where ignorance is glorified and education/outside the box thought is considered weak or selling out. What other culture do you know where you’d gain more widespread respect holding a glock then cradling a schoolbook?

Ludacris wants to tackle serious issues in Release Therapy, wins a Grammy, and gets called a sellout for his troubles.

Wayne, wants to add a little rock to his sound and he’s already got people saying he’s “gone white”. At least he’s trying something different, whether it will be good remains to be seen.

Meanwhile, OJ Da Juiceman and Gucci Mane receive praise for wearing ignorant values on their chest; lacking the talent and creativity to make their stories worth a damn. Their stories used as motivators for people with no idea what that life is truly like. They see the flash and hear their boasts and think that’s the way to escape mediocrity and poverty. All they find for themselves is a trap more expensive then whence they came. The streets are harsh. The means to survive them are even worse and I ask this question to any fan of rappers who love to tout their body count or total bricks sold.

If that life was so good, so awesome; why not do that instead of schmooze at label parties and pop expensive collars? Why grind so hard to sell rhymes to get out of the hood in the first place? They’d still be there.

Have we grown so callous that we can’t appreciate the steps The Beastie Boys, 3rd Bass, Pharcyde, Tribe, Run DMC, and so many others tried to do to make hip-hop not only innovative, but an outlet for all? By definition, the white/sellout rap that some would say Lupe, Gym Class, and others do is the true essence of the art. Unfortunately, not enough hate or guns or drugs to make it relevant to an age where vice and violence aren’t just the answer…

I can’t recall when struggle and hardship was just a “black or white” thing. I’m thrown off that you can’t be real talk or create something unique without being scrutinized by masses who choose to be so closed minded, accepting of the fact that they don’t want better. Music often times is a reflection of the times. And if the music is any reflection, then we’ve grown as uninspired and cliché as ever. It’s really sad.

There is a place for the subject matter. There is not a place in thinking that’s all there is to my beloved Hip-Hop. I find myself looking to her and asking what happened? Like a relationship gone sour, but you’re still locked in. When did she let ANYONE define what she was. All Hip-Hop had to be was possibility. Much like life, possibility makes it so worthwhile.

Much like life unfortunately, you have too many who’d rather take the easy way and not blaze their own way. It’s easier to be a killer, a pusher, a follower. So they set their soundtrack to that and pray it’s not too complicated for them to understand.

Do we fear better? Fear something new and exciting? Brave? Do the masses hate on Release Therapy because Luda because he sold out for a Grammy, or because it was harsh truths we weren’t ready to hear? Is it easier to turn your swag on; while turning off issues that still plague us as spit by Nas or K’Naan? How long are we going to be mad for no reason? Hurt others and us for no reason? Believe that hood fables are all we should aspire to learn?

These questions rattle through my brain 24-7 while I defend who I am and what I listen to. The art is on the verge of collapsing under the weight of sheer ignorance and it’s the few who still realize what Hip-Hop is that keep it going. I never thought I’d see the day I’d have to defend liking Andre 3000, as if he isn’t as real as the rap game could be; with the talent to match. Too bubblegum I guess, despite FEATURES that have been more raw then whole albums of his contemporaries. Since when did a man who blends everything that rap could be and then some have to come under fire for being too watered down for Hip-Hop?

It makes me wish I could stop the madness and give up. Then I realize all I can do is keep my ears open, accept all styles and flows, and remember that it can be only good or bad. That’s my responsibility to Hip-Hop.

What are you doing to make sure it survives another day?

Or perhaps I’m just being too white for you?

But since when was having a voice, being white? Or black? I thought intelligence was human. I suppose to enjoy Hip-Hop these days; I should just stop with that, right?