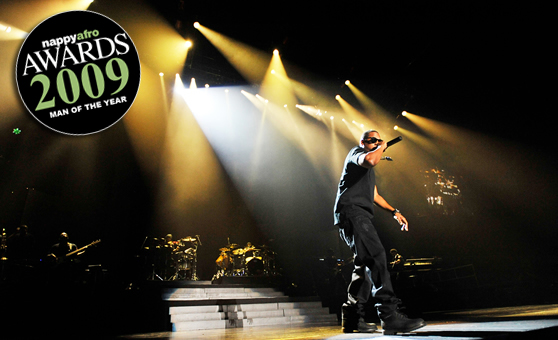 In 2008 it couldn’t be denied by anybody that it was the year of Weezy. With the release of his sixth album Tha Carter III, which saw accolades such as one million first week sales (3x Platinum to date), Grammy awards for Best Rap Album, Best Rap Song (“Lollipop”), and Best Rap Solo Performance (“A Milli”), it was clear that Lil Wayne had finally reached the apex of the rap game and 2008 was his breakout year. While I provided my thoughts on Why Jay-Z Should Be Man Of The Year with his Glastonbury festival headlining performance, successful Heart Of The City tour (w/ Mary J. Blige), and $150 Million deal with Live Nation, it wasn’t enough to discredit Wayne from the achievements and accomplishments he had in the same year. 2009 was a different story though as Jay-Z got back to business and showed the industry and the world that at 40 years old, age ain’t nothing but a number.

This year had many contenders for the “Man Of The Year” title from President Barack Obama and his Nobel Peace Prize achievement to Drake and his breakout year in Hip-Hop/Rap music, but out of the contenders it was clear that Jay-Z stood out above the rest to take the honor. In such as short amount of time Jay-Z was able to accomplish so much following the release of The Blueprint 3 back in September 2009. But before the release of his eleventh album, he made an unprecedented deal with his former record label Def Jam for $5 Million, which allowed him release from his contract and the label, and control over his future master recordings. The Blueprint 3 while met with mixed reviews went on to be Jay-Z’s 11th U.S. number one album (surpassing Elvis Presley on the all-time list), the second highest selling Hip-Hop/Rap album of 2009 (behind Eminem’s Relapse at 1.5 million), and his first UK number one single with “Run This Town”.

Following the ‘Fro’s posting of The Blueprint 3 as Album Of The Year honors for 2009, it’s easy to see why as Jay-Z did more this year in terms of accomplishments and contributions with the album and as an artist. An award like Man Of The Year encompasses much more than just music in terms of album sales and awards, it includes the involvement and impact of said artist made outside of the genre as well as within. From the almost immediate halting of the Auto-Tune trend in Hip-Hop music with the single “D.O.A. (Death Of Auto-Tune)” to the Answer The Call benefit concert to Oprah in Marcy Projects as well as still being top earning rapper on Forbes 2009 list with $35 million, Jay-Z indeed provided a blueprint this year both musically (album) and professionally (business strategies) for rappers to follow and borrow from for years to come.