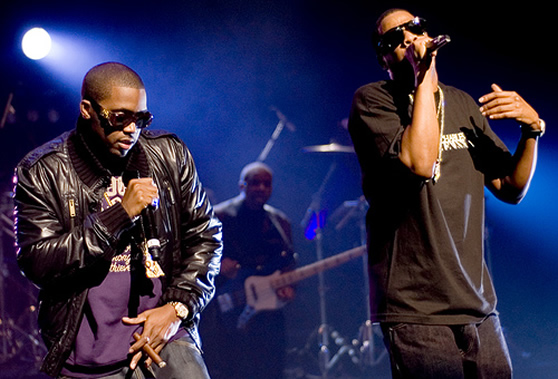 So the year is coming to an end, The ‘Fro’s review section is coming to a close for the year due to the end of year release decline. But if you haven’t looked around, the Forums have been seeing shots back and forth between B-Easy (representing the Jay-Z Stans) and P From The D (Representing the Nas stans), however another name has been added (And you know of whom I speak of when P-Body is around). All of which was started by a couple comments made by Jay-Z and an article written by DuB *shotsfired*

Being the Nas stan that I am, you guys can guess my point of view in the argument. But at the same time I must acknowledge the good music that Jay-Z has put out himself, Reasonable Doubt being one of my top 10 albums of all time. But you niggas do know the beef is over right? They over it, so no point in going to war over it. Of course Jay gonna say “Takeover” was better, it was HIS song.

But I’m not here to bring you a Nas vs Jay-Z Sound Session. Instead I’m taking the other road and giving both artists praise for their music and contributions to Hip-Hop. We all know what they can do separately. That being said let me remind you what they can do when they get together. So for this year ending Sound Session I bring ya a Triple Threat:

Also I gotta give a shoutout to Jerm. Remember I said “*noshots*”