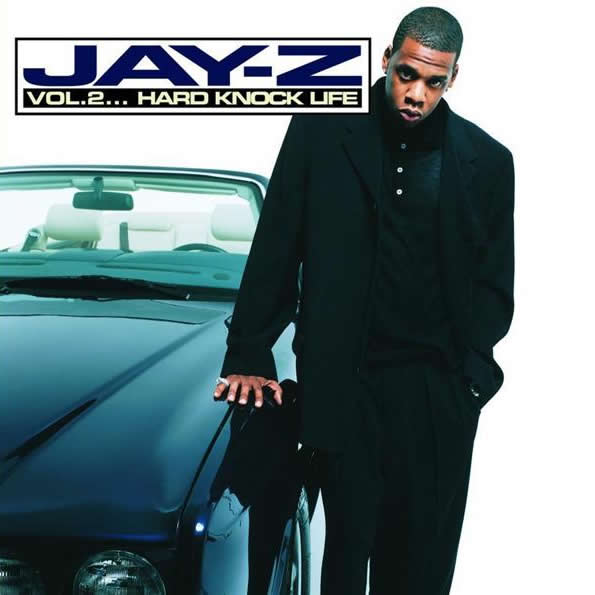 I been thinking about giving this album a review for awhile now. I actually started writing this to turn into King Jerm, as a sample of my writing while he was deciding if he would let me join the staff. While I was writing I actually felt like this may make me sound too much like a Jay-Z stan, which I’m not (Ok maybe I am). Instead I reviewed Tha Carter II and left most of the Jay-Z praise to B-Easy with an occasional assist from H2O. Well with the release of Watch The Throne from Kanye and Hov, there seems to be a debate on if Jay has lost it, and even by some is Jay-Z even good (shocking!!!)? I am not one for the arguments, but I think some of you youngsters need to be reminded on who the original Mr. Carter is.

In 1998 Jay-Z released his most commercially successful album in Vol. 2… Hard Knock Life. It has reportedly sold more than 5 million copies and helped begin the careers of rappers like Ja Rule and Amil, while giving established artist like DMX a bigger stage to stand on. With all of this said, it is sometimes forgotten how good this album is. Jay-Z takes a chance and goes in a different direction production wise from his previous two efforts. He does things that would make the average emcee think he was crazy. Yet everything comes together and til this day you can hear the influences that this album left with other Hip-Hop artists.

1. Hand It Down (Intro)
Featuring Memphis Bleek; Produced by DJ Premier
Jay starts this album just like the last two, with Pain N Da Ass giving a brief monologue about quitting the game. This leads directly into the beat that is utterly ridiculous. It samples both “Are You Man Enough” by the Four Tops, and lyrics from Jay-Z & Memphis Bleek’s “Coming of Age” from Reasonable Doubt. Bleek takes the mic and lays down the first verse of this album. This may be Bleek’s best verse of all times:

I go to sleep with a pictore of a Porcshe on my wall
Man I’m tryin’ to come up on yall
Get one up on yall, that’s why I hustle in these streets
From sun down to sun up on y’all

I liked this verse so much I went and bought Memphis Bleek’s The Understanding when it was released.

2. Hard Knock Life (Ghetto Anthem)
Produced by The 45 King
As soon as this track starts, it has an epic feeling to it. It feels like this can be one of those songs that help define an artist entire career. The sample from Annie only enhances it. Jay doesn’t rest on the undeniably catchy beat and legendary sample, he spits some tough bars on here too.

I don’t know how sleep, gotta eat, stay on my toes
I gotta a lot of beef, so logically, pray on my foes

3. If I Should Die
Featuring Da Ranjahz; Produced by Swizz Beatz

If I should die my niggas, don’t cry my niggas, I did a song with Mary J. Blidge my nigga.

How often have we heard emcees take that line verbatim, or even flip it. This is a great song. Da Ranjahz each hold their own, but Hov’s two verses are ridiculous. The second verse has Hov questioning life and the meaning for his existence, as well as if he is living right (“Will I chill in the flames, for all the ills in my brain – I need to know”).

4. Ride Or Die
Produced by Stevie Jordan of The Hitmen
I always took this track as a warning shot. He speaks on emcees he felt were under him that kept “kickin sneak shit”. The beat is a classic in itself, but what Hov does to the instrumental only takes it to the next level.

5. Nigga What, Nigga Who (Originator ’99)
Featuring Big Jaz & Amil; Produced By Timbiland
Timbo gives Jay a real diamond here. The beat is futuristic and complex, but simple at the same time. For people who make claims that Hov can’t switch up his flow, check this out. He uses a flow that is like a flame thrower on this, and he is dropping jewels at the same time. Amil was Rocafella’s go to girl when it came to hopping on the hooks. After Hov spits 3 (really like two and a half) verses, Jaz comes in and defecates over the beat that Jay had already killed.

6. Money, Cash, Hoes
Featuring DMX; Produced by Swizz Beatz
DMX didn’t always have an issue with the Jiggaman. He actually professes his loyalty to Hov on this track (“Jigga, My nigga, Ride for Life”). I guess things change. Anyway, I love the direction these two great rappers took this Swizz Beatz production. Although the production has some hints at a commercially friendly sound, Jay and X took it and made it for the streets. I miss the days of Ruff Ryders and the Dynasty.

7. A Week Ago
Featuring Too Short; Produced by J-Runnah
I have always thought that Jay-Z was one of the most underrated story tellers in Hip-Hop history. Here with a mellow beat Jay gives us a story about being on top, then falling, and betraying your partner who is still on top. Jay gives us this epic story through the eyes of the betrayed friend. Too short delivers the hook perfectly on this track as well.

8. Coming of Age (Da Sequel)
Featuring Memphis Bleek; Produced by Swizz Beatz
You know, until I started actually writing this I never thought about the fact that Swizzy gave Hov three jewels for this project. This is a conceptual track. It finds Memphis Bleek (Jay’s right hand man) questioning why he is the number two guy and plotting to take his mentors spot, and Jay-Z (The head of the operation) knowing that Bleek will betray him, and plotting the best way to take care of his young comrade. Man if this were the first album ever hearing Bleek, you would have thought he was a star in the making. I would suggest going back to another classic, Reasonable Doubt, and listen to the first part of this story. I always wondered if their would be a part 3, maybe with J. Cole instead of Bleek.

9. Can I Get A…
Featuring Ja Rule & Amil; Produced by Irv Gotti & Lil Rob
Ja owes Hov for this one. This track blew both Ja Rule and Amil up (Amil not so long though). This is that in the club joint that everyone loves even today.

10. Paper Chase
Featuring Foxy Brown; Produced By Timberland
Back on to the story telling. This is a joint about Jay (The Dealer) sending Foxy Brown (Ride or Die Chick) to a town or a city, and making money out there. this is the classic Scarface type of story, except he doesn’t die at the end.

11. Reservoir Dogs
Featuring Beanie Sigel, The Lox, & Sauce Money; Produced by Eric Sermon
This beat will take you to the Shaft Theme song instantaneously as it is the main sample on this track right here. You have all of these great emcees sounding hungry on this one. It feels like everyone is gunning to have the number one verse on here. Jadakiss even spits the classic line “Gangsta’s don’t die, they get chubby and move to Miami”. Then Hov comes on at completely destroys everyone’s previous efforts. This is a classic posse cut.

12. It’s Like That
Featuring Kid Capri; Produced by Kid Capri
Imagine one of Kid Capri’s dopest beats and then Jay-Z dropping some of his realiest lyrics. That is precisely what we get from this track. Jay comes with it over a relaxed, almost pop sounding beats.

13. It’s Alright
Featuring Memphis Bleek; Produced by Damon Dash & Mahogany Music
I swear when Bleek was at this stage of his career, he sounded like he could be a major player in the next five years (We see that didn’t happen). This is essentially a track about living life the way you want to live it. This is actually also found on the Streets is Watching soundtrack. I love this; it is a definite banger

“Said she loved my neckless, Started relaxin, Now that’s what the fuck I call a chain reaction”.

Although this song is simply JD and Hov doing their flossing thing, with lines like that and an unbelievable beat from JD, this is still a classic joint.

Bottom Line:
For all of you young cats who never heard a Jay-Z at the beginning stages of his career, should check this one out. I love both Reasonable Doubt and The Blueprint, but this one right here has a sound that seems like the mainstream radio would love, even today. Still this album stays true to Jay-Z and his hood stories. Hov does a great job with picking beats that are radio friendly, yet keeping his stories and rhymes gudda. This is a must have album for any Hip-Hop head. If this were to come out today, and I had the chance to review it, well let’s just say that nappyafro would have a five star album.