The Prophecy Is Complete… 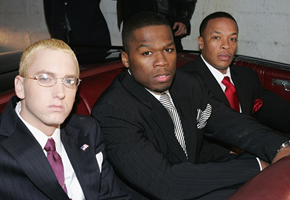 Welcome to The Stoop with H20! With Eminem’s shocking new freestyle, it seems as though the prophecy is complete: the Three Headed Monster is coming. If you don’t know what I’m talking about here, it’s the release of 50’s, Dr. Dre’s and Eminem’s new albums. As 50 said it: “Before I Self-Destruct, I’ll Relapse, then Detox.” With Before I Self Destruct coming out Dec. 9th, it seems that Relapse by Eminem and Detox by Dr. Dre will come out soon after the release, either REALLY late Q4 2008, of early Q1 2009, which seems more like it.

Still, I can’t shake the feeling that this maybe a little bit rushed. I mean, 50 Cent‘s album was supposedly more important than Curtis, to the point where he was literally telling the public he couldn’t wait to release Curtis so he could get to work on his next, much darker project. Advertising for your NEXT album while you’re releasing one? No wonder Curtis wasn’t better than Graduation. “Get Up” is alright; nothing really to go crazy over, but I feel like 50 Cent is going to have to go A LOT harder than that if he wants this Three Headed Monster to be as a big as he says it’s going to be.

More importantly however is Eminem‘s record. I’m not sure if he’s ready for this to be honest. While his freestyle was hot, it was kind of just a little sample of what he can do: he has done a lot better in the past. I feel like Eminem needs to work as hard as Dre is doing on Detox for his album. Well, OK, maybe not THAT hard, but the point is that Eminem shouldn’t feel like he should have to release an album around the same time that 50 and Dre does. At the same time, this album is going to be huge, I don’t think I have say that, but it will be. After four years in limbo, Eminem sounded hungrier than he has in a while on that record; Relapse should be a solid record, but I’ll have to wait for the first single before I say that it will be classic.

Speaking of Dr. Dre, the Detox is supposed to be finally finished, after all of these years. Still, I don’t know, something just doesn’t feel right. Of course, when Detox comes out, it will be under the same circumstances as Kingdom Come and Tha Carter III: a huge fan base will be there to clean out all of the stores that hold it (Detox will definitely sell over a million in the first week: you heard it here first!), and everyone will be expecting for it to be classic. If it is, Dr. Dre will be back in the limelight again, only to gradually drift back out since this is his last album. If it isn’t, no big deal, since that huge fan base that bought the album will be there to argue and fight with whoever thinks it isn’t. Dre is pretty much in a win-win situation right now.

Overall, the Three Headed Monster should be the biggest thing to happen in Hip-hop this year. That’s right, even bigger than Tha Carter III. Eminem and Dr. Dre, being out of the loop for several years, will definitely have something to prove here, but as for 50 Cent, he doesn’t have to really prove anything: he makes a surprise classic album, alright, great for him. But he makes just a decent album, or even a really bad album, it won’t take away from Em or Dre’s sales. All this is basically me saying that Q4 is going to be huge, which I think I’ve said about a 100 times already. Watch out…the stars have aligned, and the Three Headed Monster is coming…